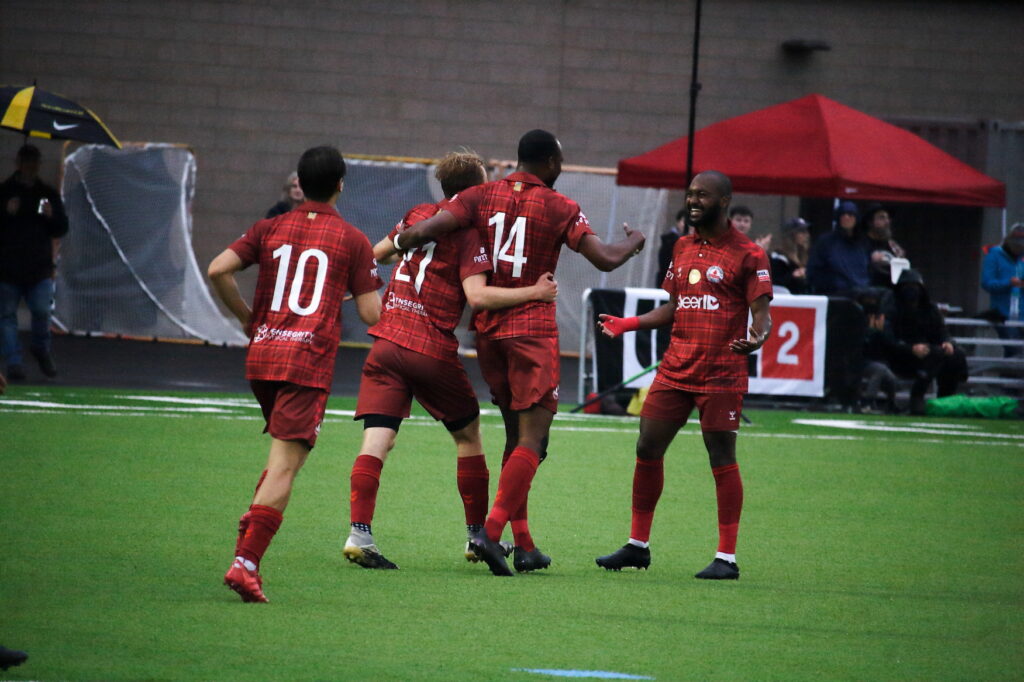 Two first half goals from Jordan Jackmon at Civic Park made the difference for Lane United as they cruised to their first victory of the season against Oly Town FC (2-0).

Not only was this the first win of the USL2 season for Lane United, but it also marked their first clean sheet of the year as they held their opponent without a single shot on target for the second straight match.

The Reds dominated in front of a small, but eager home crowd that braved the constant rainy weather. The Lane United defense was fantastic throughout the game and, as a result, Oly Town FC was unable to create any meaningful chances.

The Reds were able to find their first goal of the match in the 14th minute when Duncan McGuire flicked on a cross from Edo Merci to Jordan Jackmon, who rose high to head in off the bottom of the right post.

The scoring continued for Lane United when Duncan McGuire’s beautiful backheel flick off a pass from Diego Dutilh went directly into the path of an onrushing Jackmon, who tucked it away for his second goal of the evening. Striker Duncan McGuire forced a penalty late in the half, but his spot kick was saved by Oly Town FC goalkeeper Sawyer Price.

The second half was more of the same for Lane United, as they continued to stymy Oly Town FC. The visitors did manage some half-chances, but the stout defense prevented the visitors from generating any real danger.

Substitute José Carlos González rattled a left-footed strike off the bottom of the crossbar after a nice run and cross from the left by Joao Costa in the 86th minute, and the Reds’ were able to see out the win comfortably thanks to their fantastic defensive organization.

The Reds will travel to Salem for a match against Capital FC Atletico on Friday, June 10th, at 7pm. CFCA took all three points in a close match at Civic Park last week.

6’ CHANCE (LUFC) – Jackmon almost gets on the end of the cross to find the opener, but it’s just out of his reach.

14’ GOAL (LUFC) – Jackmon scores off a headed flick from Duncan McGuire to find the opener.

24’ PENALTY MISS (LUFC) – Duncan McGuire’s penalty to the left side of the frame is saved.

40’ GOAL (LUFC) – Jackmon doubles the lead before halftime with a clinical finish after a fantastic heel flick from McGuire.

57’ CHANCE (LUFC) – Lane United’s freekick pings around in the visitor’s box, but nobody is able to turn it in.

86’ CHANCE (LUFC) – José Carlos González’s shot slams off the bottom of the crossbar.