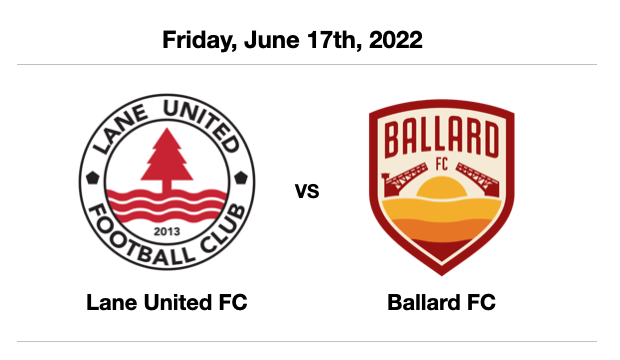 The Reds looked outmatched when Lane United FC last played Ballard FC on May 21st. Costly turnovers and a few early chances surrendered by LUFC were enough to allow Ballard to walk away with their first-ever win in their first-ever game, 5-1.

The singular goal scored by the Reds came with just three minutes left as it was clear that a lack of camaraderie and togetherness was present for LUFC early on.

“The first time we played them it didn’t go well for us,” said Modou Sowe, last Friday’s Man of the Match. “Now that the squad is getting along together and everyone is playing and knows how everyone else plays, we just gotta put it all out on the field.”

“We obviously want this one back,” Assistant Coach Conner Cappelletti added. “That score wasn’t indicative of who we are as a team so we’re excited to play them again and show them what we’re about.”

Coach Cappelletti helped lead practices this week due to Head Coach John Galas and a few other players isolating after exposure to COVID-19. Galas’ and the rest of the players’ status will be determined before game time on Friday.

Now 26 days since that season-opener, a lot has changed for both squads.

The Reds are currently playing their best soccer of the year, highlighted by a strong second-half effort against CFC Atletico last Friday. The team hasn’t lost since May 27th and currently sits in fifth place in the Northwest Division standings. Sowe summed up the general feeling for both himself and the entire team nicely heading into Friday’s match.

“Very confident,” Sowe said regarding the team’s current state. “That’s how you’re supposed to be. Doubt is just an illusion. A fear.”

Meanwhile, Ballard is coming off easily their worst game of the year. Thanks to a big-time performance by Oly Town FC’s goalie, Ballard tied Oly Town last Sunday, 1-1. This marked Oly Town’s first non-loss of the year and Ballard’s first non-win. Coach Capp believes this frustration mixed with Ballard’s smug mindset from the last time the two teams squared off could play into the Red’s favor.

“They dropped points on the road, and they’re going to be upset about it,” Coach Cappelletti said. “They’re going to want to get those points back, and I hope they come in a little overconfident knowing they beat us 5-1 already so we can punch them in the mouth. They want that redemption.”

Despite Ballard’s recent draw and the increasing momentum for the Reds, the visitors from Seattle still stand second in the division just a point behind Capital FC, with two games in hand.

They’re lethal on offense, as three players have scored three goals or more on the year, they have a division-best +8 goal differential, and they’re coming off a friendly a few weeks ago against Cultures United FC where they found the back of the net eight times. They’ve also given up just three goals across five games this season.

“They have that new energy and feeling about them,” Coach Cappelletti said. “It happens with any new team essentially, but there’s just something about new energy. Everyone lays themselves out for it and gets super-bought in.”

Ballard will travel for the second week in a row, this time to Civic Park in South Eugene, OR. Kick off is set for Friday, June 17th at 7 pm. Tickets to the match are available on the LUFC website and a live stream will be available on our Eleven Sports channel.