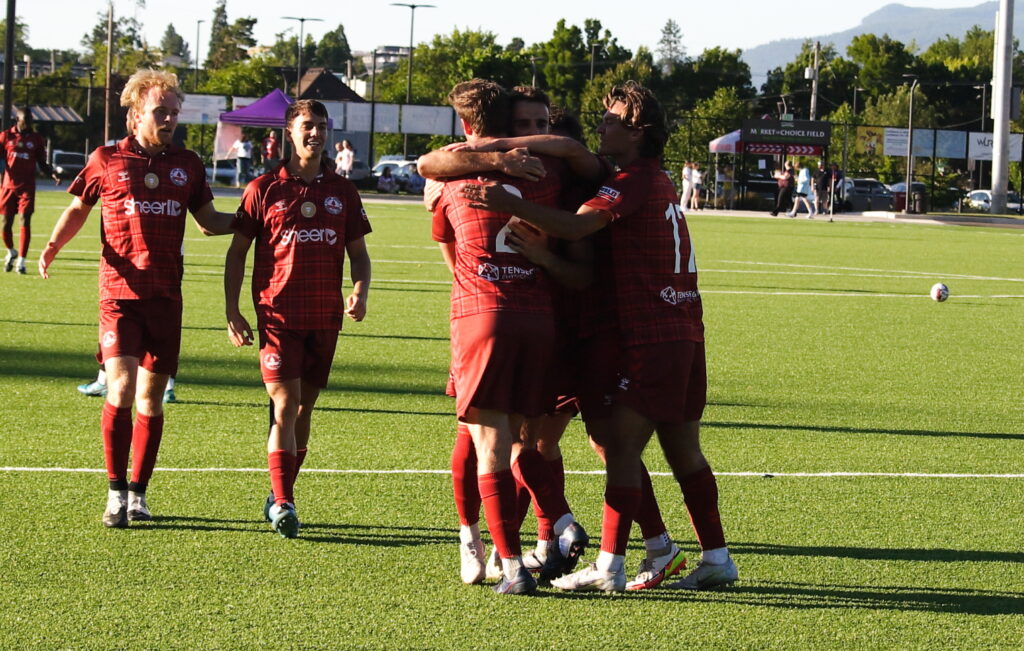 In their second straight home game at Civic Park and their first game of the year against PDX FC, the Reds saw their largest and most-spirited crowd of the year. In return, LUFC’s defense and offense fed off the energy with a dominating performance led by a hat trick from González. With the 4-1 victory, the Reds keep their playoff hopes alive.

Even though the first-half score wouldn’t show it, the match started as a defensive slug off. For LUFC, defenders Michael Hatcher and Modou Sowe made their presence known by stampeding any PDX attack that reached the backline, specifically the box.

For the visitors, their defense was snubbing the attack much earlier on the field. This, combined with a little overpassing and sloppy possessions from LUFC, made for a timid and quiet offensive start for the Reds.

PDX’s Black Hearts Union, the team’s traveling percussion and support group, sensed the slow start from LUFC and bombarded the players with demeaning chants and jokes.

Thankfully for the Reds, however, a PDX FC penalty jump-started their offense. After Duncan McGuire was shoved in the box from behind on a beautiful cross, José Carlos Gonzalez hooked the penalty kick just past the outstretched arm of goalie Austin Rogers to get the Reds on the board, 1-0.

After the goal, LUFC’s offense looked much more aggressive and lively. They pressured PDX’s defense into conceding two corner kicks in the next ten minutes and cashed in on the second opportunity. When the initial corner was half-cleared to the top of the PDX box, the ball trickled out to Joao Costa, who, on a volley sent a frozen rope off the underside of crossbar and in for his first LUFC goal. Suddenly, the Reds sprung out to a 2-0 lead.

LUFC’s defense continued to stand its ground for the entirety of the first half. They didn’t allow a single shot on goal besides a deflection that was handled effortlessly by Albert Escuin. The sole defensive first-half mistake for the Reds came when Brian Torres’ pass back to Escuin was miscontrolled and picked off by Ryan Wallace in the penalty box, forcing Escuin to trip and foul Wallace in the process.

Jacob Babalai cashed in the opportunity despite Escuin getting a hand of the shot, as PDX now cut the lead in half at 2-1.

After a nice buildup, LUFC responded immediately to PDX FC’s goal. A beautiful cross from the left wing found González in strong positioning in front of the net, and Gonzalez flicked on a perfect header inside the far post. The Reds now led 3-1 going into halftime, as any chant from the Black Hearts Union now turned into pure silence.

With a two-goal deficit before them, the visitors came out in the second-half trying to compensate with more aggressive attacks. Most of these ended with turnovers on forced passes, or just poor shot selections, however. The PDX FC players were starting to get increasingly upset with their teammates, referees, and themselves with the impending blowout.

Meanwhile, LUFC kept padding their lead. Ryan Brakke threaded the needle on a perfect through ball to a cutting González, who latched onto the pass and in one motion sent a first-timer into the far side netting with his left foot. González, the leading scorer for the Reds last season, was the Cornucopia Man of the Match winner on Thursday night with the first hat-trick for a Red this year.

With the lead now 4-1, Head Coach John Galas began to substitute in some players, with Luke Waters getting his first league action of the year after suffering an injury in training camp, and Jaume Rubio seeing the field for the first game since the opener in Seattle after recovering from his own muscular injury.

The Reds kept constant pressure on PDX FC’s defense but their goalie, Dylan Debaldo, put on a clinic with several acrobatic saves to keep the deficit at three. Debaldo subbed in at halftime for PDX but was easily one of the brightest spots for a for the visitors, making 8 second-half saves.

With the 4-1 loss, PDX FC has now allowed a disconcerting 13 goals in their last three games while only scoring two. Meanwhile, LUFC’s unbeaten streak grows to five, their record improves to 2-3-2, and they climb back up to third place in the Northwest Division.

The Reds will have an opportunity to keep up their hot play and extend the unbeaten streak to six next Thursday against OVF Alliance. Kick-off will once again be at 7 pm at Civic Park. Tickets for that match can be purchased here.

10’ CHANCE (PDX) – Jacob Babalai gets good positioning but misses a bicycle kick high of the goal by about ten feet.

30’ GOAL (LUFC) – Joao Costa bangs the ball off the underside of the crossbar and in off a cleared corner kick.

41’ YELLOW CARD (LUFC) – Albert Escuin gets cited for tripping Babalai in the box.

43’ GOAL (PDX) – Babalai takes advantage of the PK despite Escuin getting a hand to it.

44’ CHANCE (LUFC) – A Duncan McGuire laser misses goal to the left despite an awkward angle.

45+’ GOAL (LUFC) – González heads a ball perfectly into the back of the net off a cross from the left wing from Brian Torre.

55’ CHANCE (PDX) – Babalai almost scores his second goal of the day on a chip just in front of the net, but Escuin gets a palm on it.

57’ GOAL (LUFC) – Gonzalez finds the back of the net for the third time off a perfect through ball from Brakke.

64’ CHANCE (LUFC) – McGuire’s set piece is saved with a leap from Debaldo.

72’ CHANCE (LUFC) – Debaldo keeps PDX in the game momentarily with two clutch saves from close distance within seconds of each other.

74’ CHANCE (LUFC) – Debaldo makes another terrific leaping deflection, this time on a shot from Diego Dutilh.

86’ YELLOW CARD (LUFC) – Dutilh is penalized for slashing a PDX player across the shin pads.

90’ CHANCE (LUFC) – Brakke’s touch is partially nicked out of play by Debaldo.