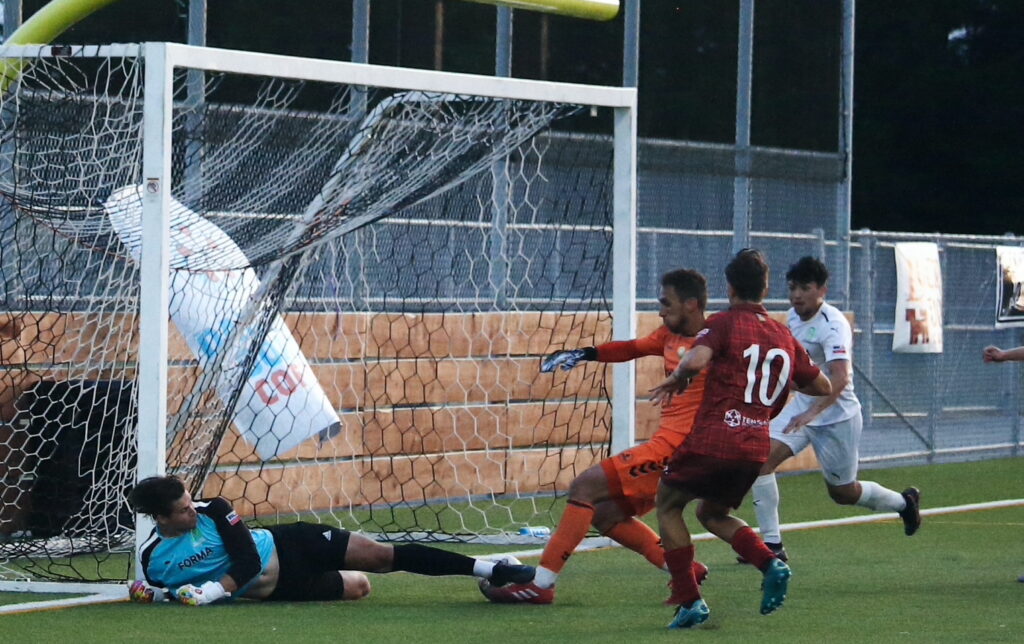 On an overcast evening in Tumwater, Wa., Oly Town FC stymied every Lane United attack for 92 minutes. Unfortunately for the home side, the Reds finally broke through on a set piece in the 93rd minute when Spanish netminder Albert Escuin, who had joined the rest of the team in the box, slotted home the rebound from a Brian Torre free kick.

The game started off without either side able to control the midfield, as the two teams went back and forth without either creating clear chances. Near the quarter-hour mark, Escuin made two fantastic saves within a minute of each other to keep the score knotted at nil-all.

Lane United’s first real chance came in minute 23 when Cornucopia Man of the Match Ethan Doud – making his first start for LUFC – played a through ball to Duncan McGuire. The pacey striker carried it down on the right side, but his low, crossed shot flew past the far post.

Coach John Galas was forced to make a switch at halftime, as a shoulder injury to center back Modou Sowe led him to introduce Chilean playmaker Diego Dutilh, with Robin Terry moving over to cover for Sowe and Ethan Doud dropping to right back. Doud was a menace to Artesian attacks all game, winning countless tackles all over the field.

Six minutes into the second half, a long ball by Oly Town FC led to their lone goal. Escuin came rushing out of his box to clear, but striker Jason Fairhurst got there first to tap around him, then won a footrace to the ball to finish off the play with a sliding shot.

Galas made the rest of his field player subs between the 60th and 68th minute. As the Reds pushed forward in search of an equalizer, they offered opportunities for Artesian counterattacks, but Escuin, Michael Hatcher, and the rest of the Reds’ backline snuffed out their chances.

Lane United came alive in the final minutes of the match, applying plenty of pressure to the home defense. After a handball shout in the 91st minute went unpenalized, the visitors finally got their goal through the unlikeliest of heroes. They didn’t stop there, earning two successive corner kicks a minute later. The match ended as Dutilh got off a spinning left-footed shot, but it was gobbled up by goalkeeper Sawyer Price and the referee blew the final whistle.

The late goal keeps the Reds’ slim playoff hopes alive, but the team will have to win out and get a lot of help from other teams in the Northwest Division to catch either Capital FC or Ballard FC. Lane United returns home to Civic Park to take on Capital FC Atletico in their final home match of the 2022 USL League Two season next Thursday.

13’ SAVE (LUFC) – Fairhurst makes a weaving run through the middle, dishes to De la Cruz on the left, but Escuin gets low to make the save.

14’ SAVE (LUFC) – Escuin dives low and to his right to tip away a shot following a corner.

23′ CHANCE (LUFC) – Doud releases McGuire down the right, but the striker’s low effort goes wide of the far post.

34’ CHANCE (OLY) – A free kick from outside the box is swallowed up by Escuin.

36’ CHANCE (LUFC) – Doud finds McGuire in the corner of the box and the forward cuts inside to his left, but his shot sails high over the bar.

43’ CHANCE (LUFC) – Torre cuts inside to his right and blasts over the middle of the crossbar.

45’ YELLOW (LUFC) – Jaume Rubio is cautioned for a dangerous tackle.

45’ SAVE (LUFC) – De la Cruz hits a bouncing ball at the top of the box straight at Escuin.

46’ – SAVE (LUFC) – Escuin flies to his left to gobble up a curling shot from Andoyan.

51’ GOAL (OLY) – Fairhurst beats an onrushing Escuin to a long ball and scores into an empty net.

77’ YELLOW (OLY) – Manny Nicasio is shown yellow for a late tackle on Doud.

93’ GOAL (LUFC) – Escuin pounces on the rebound off a Torre free kick to push home for the equalizer.

95’ CHANCE (LUFC) – Dutilh spins and shoots from the top of the box with his left foot, but it goes straight at Price.