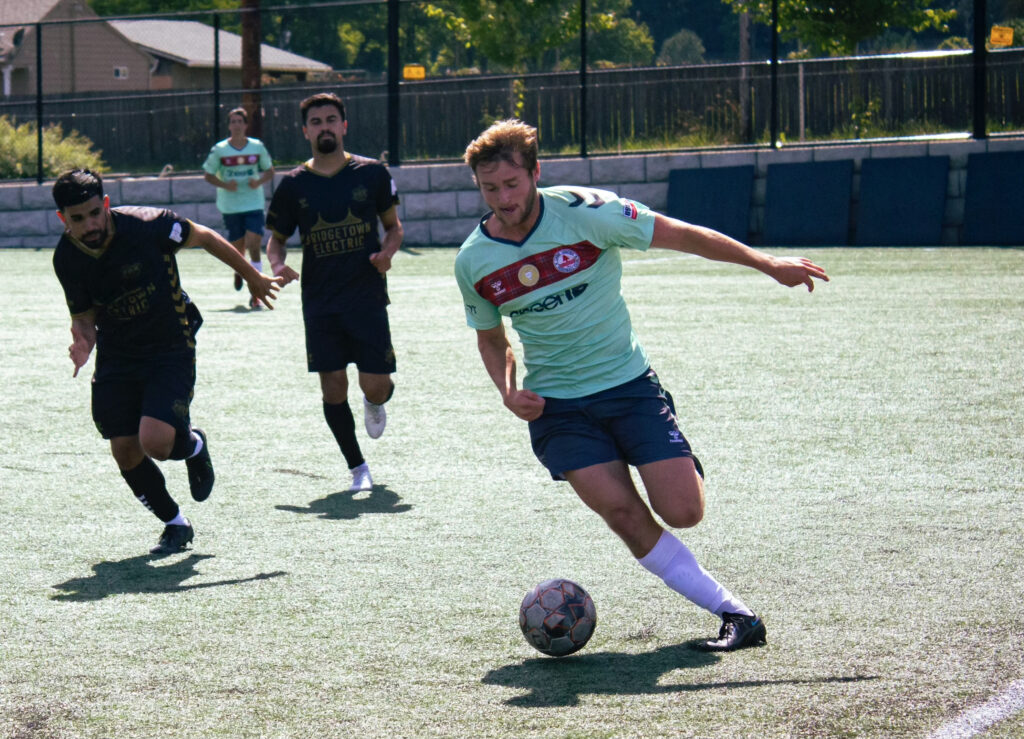 After a hard-fought 2-2 draw in their last home game of the season against Capital FC on Thursday night, the Reds extended their unbeaten streak to nine games. With the win, Lane United clinched 3rd place in the USL2 Northwest Division.

LUFC has now beaten PDX in both games of their 2022 USL League Two regular season series by a combined score of 8-1.

The Reds took a commanding 2-0 lead heading into halftime and repeated the feat in the second 45.

Forward Tommy Case opened the scoring in the 10th minute with a right-footed laser past the PDX ‘keeper off a perfect through ball from Diego Dutilh; fellow forward José Carlos González then doubled the lead 18 minutes later with a clean finish off a wonderful cross from the right by Ethan Doud.

Midfielders Diego Dutilh, this time with Case returning the favor as provider, and Ed Port, after a nice run and shot by Joao Costa, added goals of their own in the second half to round out the scoring.

Port put the icing on the cake with a close-range header in the 86th minute. It was his last touch of the season as well; he was kicked in the face as he scored and was left with a bloody nose. He will miss the final match as he was called into preseason by Jacksonville University.

Standout goalkeeper Albert Escuin missed the match due to personal reasons, but Kieran Brown was splendid in net, making seven saves and helping to preserve Lane’s third clean sheet of the season. It was his first start of the season and his performance earned him the Cornucopia Man of the Match award.

The Reds will play at OVF Alliance on Thursday, July 17th at 2 p.m. in their final USL League Two game of the regular season. It will be the third meeting of the season between the two sides, who drew 1-1 away on May 29th and 0-0 at Civic Park on June 30th.

7’ CHANCE (PDX FC) – O’Hara takes advantage of an LUFC turnover, cuts inside on his left and blasts his shot over the bar.

10’ GOAL (LUFC) – After a nice build up, Diego Dutilh plays a nice through ball to Tommy Case on the right, and Case calmly finished with a low, right-footed shot inside the far post.

15’ SAVE (LUFC) – LUFC turns it over again along their backline, but Magana-Rivera’s shot is right at Brown.

17’ SAVE (LUFC) – Olmos gets on the end of a PDX FC header at the far post, but his looping header is palmed over by Brown.

21’ CHANCE (PDX FC) – Magana-Rivera sends in a nice, low cross from the left wing to the top of the box, but Homer whiffs on his shot.

27’ GOAL (LUFC) – Brakke heads a long pass from Hatcher to González, who finds Doud on the right wing, and then charges into the box to first-time Doud’s perfect cross into the back of the net with his left foot.

29’ SAVE (LUFC) – A PDX FC midfielder tries his luck from about 40 yards, but Brown does well to get back and tip over the bar.

30’ CHANCE (PDX FC) – Olmos again gets on the end of a corner kick at the far post, but his header sails a bit high.

33’ CHANCE (LUFC) – González finds himself with space on the left side, but his left-footed strike sails well wide of the near post.

35’ SAVE (LUFC) – Tshibanda makes a great individual run down the right flank and cuts it inside, but his left-footed shot on the ground is gobbled up by Brown.

38’ SAVE (LUFC) – Brown makes a phenomenal save on Tshibanda, laying out low to his left to get a hand on the striker’s left-footed shot from close range.

38’ YELLOW CARD (LUFC) – Landon Sloan is cautioned for a bad foul. This is his 6th yellow of the season, meaning he’ll be suspended for the league finale next Sunday.

42’ CHANCE (PDX FC) – Tshibanda’s left-footed shot from the top of the box goes high and wide.

43’ SAVE (PDX FC) – Dutilh makes a beautiful run down the middle of the pitch, plays the ball wide to Costa on the right, and the Porguese’s right-footed strike is tipped just wide of the far post by DeBaldo.

45’ YELLOW CARD (PDX FC) – Buckalew is cautioned for time wasting as he kicks the ball away.

50’ SAVE (PDX FC) – Lane United strings together a gorgeous build up and Dutilh plays a through ball to González on the right, and the Spaniard’s right-footed shot from 10 yards is right at DeBaldo, who manages to get enough of the ball to send it over the crossbar.

60’ GOAL (LUFC) – Case makes a run down the right side, Norville gains position and tries to see it out, but Case sticks in his right leg at the touchline to poke across goal to Dutilh, who subtly lifts it over a defender and smashes it into the back of the net from inside the six-yard box.

63’ CHANCE (LUFC) – Brakke skies for a header off a cross by Case, but his shot flies over.

79’ SAVE (LUFC) – Tshibanda rips a right-footed shot from the top of the box, but Brown parries it before pouncing on the loose ball.

84’ CHANCE (LUFC) – Port punches his right-footed shot wide after a scramble in front of the net.

86’ GOAL (LUFC) – Costa makes a nice run down the left side of the box and his shot from a tight angle is deflected in the air by DeBaldo. Port is there to head home from close range while getting kicked in the face by a PDX FC defender.