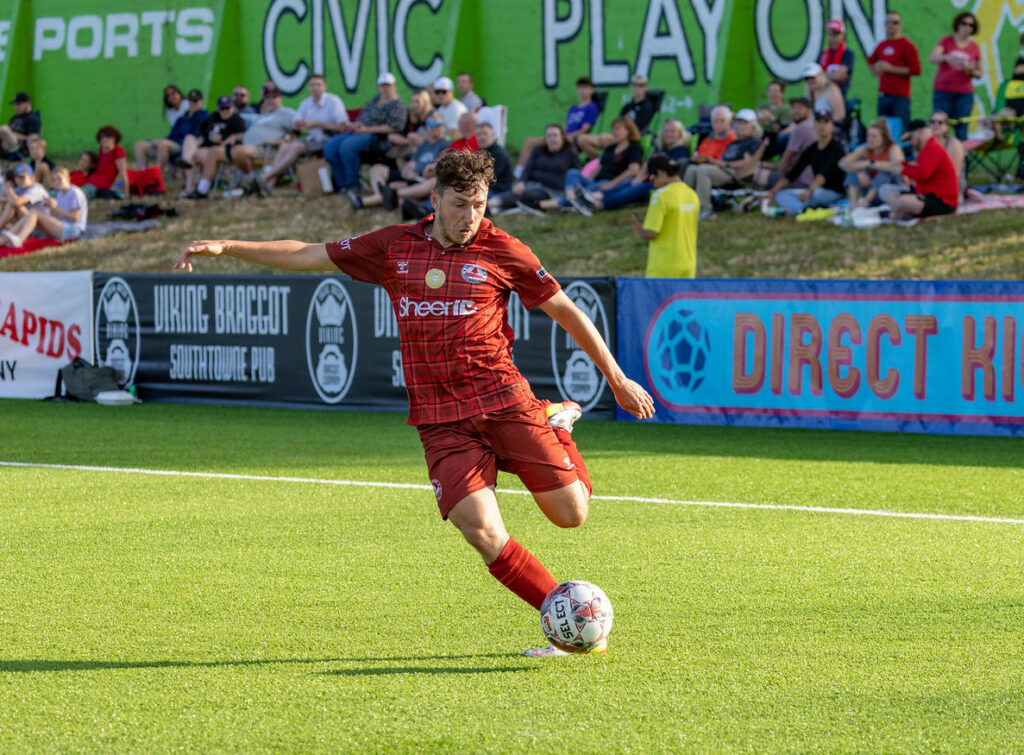 After falling 2-1 to CFC in heartbreaking fashion in the home opener and tying them weeks later in Salem, Thursday’s game at Civic Park was a chance for the Reds to prove the strides they’ve made in just a few months after an already drastic improvement from last year.

They continued to show they were up to the challenge against the league leaders and earned a point in a thrilling 2-2 draw. Lane United fell behind twice on the scoreboard, but battled back valiantly each time to level the score. Unfortunately, needing a win to keep their hopes alive, the tie officially eliminates LUFC from playoff contention.

Perhaps one of the biggest substories of the game was the shortened Reds’ bench, as no one position group felt more short-handed than the defense. With Mo Sowe out for the rest of the season with an AC joint separation, Scott Gustafson playing in Europe with his University of Washington team, and injuries to other key defenders Jordan Jackmon, Luke Waters, and Fabian Wetl, the CFC offense sensed blood early.

In the 23rd minute, Josa Sosa got the scoring started for the visitors. After an attack up the left side saw a cross get flicked on by Nick Denley, the ball fell to an onrushing Sosa, who sent the ball into the back of the net to give CFC an early 1-0 advantage.

The Reds also enjoyed some first-half chances. In the 18th minute, Brian Torre sent a dangerous cross in from the left to Ryan Brakke, but the striker couldn’t quite get enough of his head on the the ball to steer it on target. Later in the half, Ethan Doud meticulously navigated his way through several CFC defenders, but his shot was wide of the mark.

With the score 1-0 heading into halftime, LUFC needed a spark of energy to keep their playoff hopes alive, and fortunately, they got it thanks to the second-half insertion of their joint leading-goal scorer, José Carlos González.

The Spaniard wasted little time making his presence felt. With free kick after free kick yielding less-than-desirable outcomes for the Reds, González and Brian Torre teamed up on a 60th minute set piece to play it short to the Spanish striker, who juggled the near-post cross, beat a defender, and pounded it past CFC goalie Quinn McCallion. Now knotted 1-1, the game had new life.

CFC began doubling down one the offensive pressure with a majority of the next 15 minutes spent in the LUFC half. The visitors were finally able to capitalize in the 74th minute with Gabriel Silva sending a lead-pass to David Brog, who finished past Escuin with his first-touch. With just a quarter-hour left to play, the Reds needed to dig deep and feed off the energy of the full crowd at Civic Park.

As fans moved anxiously in their seats hoping for an LUFC equalizer, a flash of brilliance from Duncan McGuire was celebrated by all. A beautiful 1-2 connection with González set McGuire free outside the box to his right and he sent an inch-perfect, low strike across his body just inside the far post to level the score at two. The 82nd-minute strike reignited the crowd and yielded a celebratory back-flip from the Creighton attacker.

For the next ten minutes, loud chants of “Lane United” infiltrated the Civic Park skies, but not even extra time could provide any kind of advantage for either side. Still, the faithful Reds’ crowd showed out impressively for their team in their final league home game of the summer.

With the tie, the Reds have now drawn six of their ten matches this year and remain unbeaten in their last eight. They remain in third-place, but now cannot statistically catch CFC or Ballard FC for a playoff spot. The Reds will be back in action this Sunday, July 10th, against PDX FC in Portland at 2p.

44’ CHANCE (LUFC) – Doud puts on a series of flashy moves to get into the box, but misses the shot wide right.

53’ SAVE (CFC) – McCallion makes a leaping catch off a Dutilh shot after Brakke causes a turnover.

60’ GOAL (LUFC) – González gets on the end of a Torres free kick in front of the goal, juggles it, and sends it to the back of the net.

66’ SAVE (LUFC) – Nathaniel Sherwood’s looping shot is corralled directly into the gloves of Escuin.

74’ GOAL (CFC) – Brog finds the back of the net off a nice lead pass from Silva.

82’ GOAL (LUFC) – McGuire responds with a perfect shot to the left corner just beyond McCallion’s outstretched arms after a nice wall pass from González.