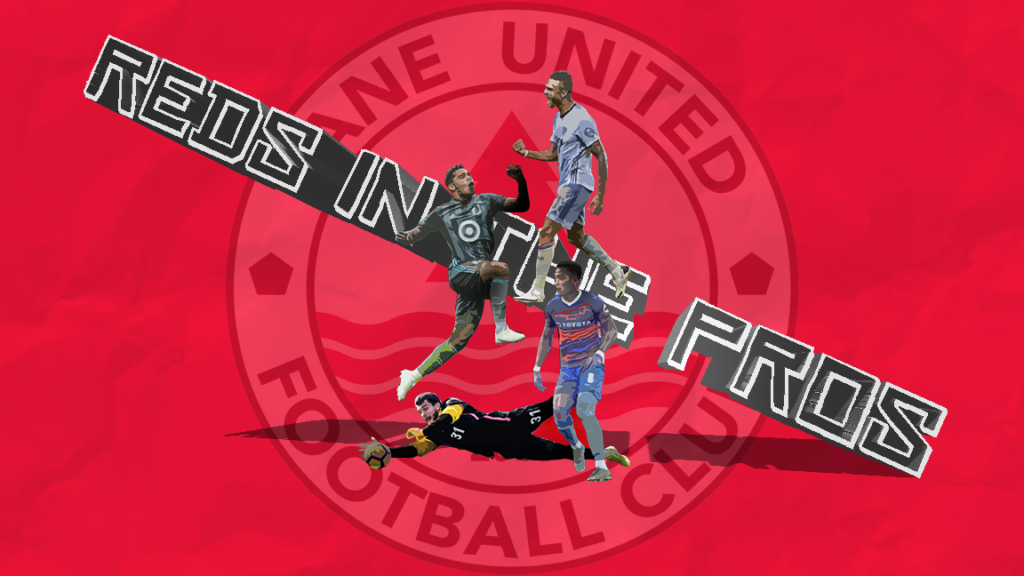 Our domestic-based former players wrapped up their 2021 seasons a couple of months ago and some have switched teams, while our internationals have hit the midway point of their seasons. As such, we wanted to provide you all with a glimpse into what’s been going on in their worlds!

Shelton finished the 2021 MLS season as a strong and meaningful player for Sporting KC. The forward played in 31 out of 36 games for SKC, recording 3 goals and 6 assists in addition to his team’s opening goal in their first round MLS Cup Playoff victory over Vancouver. He helped SKC tie for the most wins in the Western Conference with his attacking skills and 79% pass accuracy rate, thus contributing to the second-highest scoring team in MLS. During the season, he split his time between center and right forward.

Ward led the Oakland Roots SC to the USL Conference Semifinal as the team captain. As both left and right back for the Roots, he started 25 out of the 30 regular season games this season, led the team in interceptions andtied for the 6th-most chances created. In a match towards the end of the USL season, Ward scored a cheeky second-half goal that landed him #7 on the ESPN Sportscenter Top 10.

Dotson continued to have a career year playing for Minnesota United FC as a starting defensive midfielder. Dotson played in 30 games for Minnesota United, scoring two goals, and assisting on three. Overall, Dotson finished with a 79.7% passing success rate in his 2021 season, helping lead his squad to a spot in the MLS Playoffs, where they fell in the first round to the Portland Timbers. On a personal note, Hassani and his fiancé are expecting their first child shortly!

Barraza, the third-year goalie for NYCFC, played in five games – all starts – during the MLS 2021 season, finishing with three wins (two by shutout) and even tallied an assist. Barraza put a cherry on the top of his season by becoming the first-ever former Lane United player to lift the MLS Cup when NYCFC knocked off the Portland Timbers in the final on penalty kicks. NYCFC have announced that Barraza has signed on to extend his contract with the club through the 2023 season, with options for the 2024 and 2025 seasons.

Bersano completed his fifth season with the Earthquakes in 2021 as the team’s third-string goalkeeper. While he’s yet to debut in MLS with the first team, he remains an integral part of the club and on January 19th it was announced that the organization had signed him to a one-year extension, with a club option for the 2023 season. On a personal note, Bersano recently married his girlfriend, Chase, earlier this month, with several former Reds’ teammates in attendance, including Khiry Shelton & Casey Phillips.

Moon wrapped up the 2021 season having played in 29 matches – 19 starts – for Indy Eleven, notching 3 goals and 4 assists (good for T2 on the club). Earlier this month, it was announced that the attacker had signed with fellow USL Championship club San Diego Loyal, where he’ll play under the tutelage of Landon Donovan.

The former Oklahoma City Energy defender continues to rehab from the serious knee injury he suffered a little over a year ago. He reports that he’s doing well and hopes to be able to find a club and get back on the pitch in 2022!

After recovering from the muscle injury he suffered during the preseason, Miralles was finally able to debut with his new club in Spain in November, earning a clean sheet in a nil-nil draw against CD Tudelano. He followed that up with his first win the following week, a 3-2 victory over Valladolid B. Ximo has now made five league starts and one in the Copa del Rey as UD Logróñes sit in 7th place.

Seymore remained a stalwart in the Harps’ midfield through the end of the season, finishing the campaign with 33 matches played, 2 goals, and 2 assists. He added a helper in the FAI Cup. His consistent play as a holding midfielder and goal in the season finale, a 5-0 victory, helped the team avoid the drop zone. Earlier this month, Seymore moved back to the states by signing with USL Championship club New Mexico United.

Will also joined the crew of married men in 2021, tying the knot with his long girlfriend Amber over the summer, with fellow former Red Matt Bersano in attendance. Their first baby is due in March!

After wrapping up the season with Wiener Neustadt, last week Binder signed a new contract with ASK Kottingbrunn of the Austrian 4th Tier. They kick off their season in March.

Rose signed with Portmore United in his native Jamaica last year after graduating from Valparaiso University and has scored a goal with two assists in seven appearances with his new club. He was recently called up to the Jamaican National Team for the first time in a friendly versus Peru, making his debut as a second-half sub and playing the final 27 minutes.

After winning the MAC Hermann Award as the best collegiate soccer player last year, Amanda signed with Austrian Bundesliga side SK Austria Klagenfurt in July. He has since made 9 league and 2 Cup appearances for his new club and scored his first goal for them in a 1-1 draw versus Rapid Vienna in October. Klagenfurt are in 4th place after 18 matches.

The Spanish outside back remains a fixture in the starting eleven for his club and has now made 15 appearances on the season as UC Cartes sit in 9th place in their division.

Tiozzo continues to make a positive impact on his side as he’s started 15 of his club’s 16 games (coming on as a sub in the other) at center back. In addition to his defensive duties, where he’s helped his squad to the lowest goals allowed in the league, he’s tallied two goals, both contributing to team wins. Adriese are currently in 3rd place in their division with 31 points and firmly in promotion playoff spots.

After making his professional indoor debut for the Tacoma Stars in 2021 and being named All-MASL Rookie Honorable Mention, Spurr signed with the Ontario Fury for the current season and has continued where he left off, notching 4 assists to go along with 1 goal in 6 games.

​The Spanish midfielder continues to make solid progress from the torn ACL and meniscus injuries he suffered one calendar year ago. He’s working out on the pitch once again and inches closer to his return to game action.

The Swedish midfielder has made seven appearances for his Spanish club so far this season, but none since mid-October.